Day 29. The one million star hotel

I am a critical customer. I had booked the best room in the One Million Star Hotel and I had arrived in the dark, as they had advised me I should. But when I crawled in the bed that was soft and nicely scented with rosemary and earthen tone fragrances, there was some soft rain and no stars at all, so I complained. The staff acted swiftly. They took away the clouds and I got the million stars they had promised me. The Great Hunter was there and all the other constellations I don't know the names of. I searched for a list in the hotel room and found one but it only had a few names listed. Apart from Orion, The Big Bear was the only one I could read.

At night they sent some animal entertainment and to make up for their mistake the One Million Star Hotel sent me the biggest boar they had and it got so close I could see it. It was trained well. It growled a bit, enough to wake me up before it got too close, and little enough not to scare me. Upon checking in, the staff had given me all of the necessary information on how to behave during the entertainment hours, and so I turned on the small torch with the bright light that they had suggested I bring. The boar walked off.

I like a little entertainment from time to time but not too much and I had filled it out at the desk and fortunately the staff took my wishes into account. The rest of the night I slept like a baby.

I received the alarm call just before seven, in time to wake up properly to enjoy the sunrise from my bed. From my one window I could see the fog lifting over the mountains. From my other window I saw Venus, the Morning Star and a soft pink sky. When I got out of my bed and stood up I could see the sea and when I walked the few meters to the highest point of my room I had the full view, sea and mountains and sunrise and the last stars.

They didn't supply breakfast but I ate the fruits I had received as a gift from the farmer at whose farm I slept yesterday. Lemons. I sliced them open with the hunting knife I have with me to feel safe but have never used except for fruit and wild edible greens. From somebody else they might have tasted sour, but from a man with soft silent eyes and a deep love for the land they tasted fresh and healthy and nourishing.

A thought popped up in my mind. It was this: I could make a fortune if I organised small trips taking rich bored people to the one million star hotel. But I couldn't. The one million star hotel only takes reservations from people who live like me. Usually they have a room for you but it might not be the best one. You only get the best room after you got lost on a rocky mountain top in the dark and are in despair because your body hurts and it is cold and there are only big prickly bushes and boulders and no way out and you can't reach the trail and you wonder if it wouldn't be wiser to curl up next to a rock than try to climb down in the dark.

I slept in the hotel often, I am a regular customer on my walks. They know me there well enough by now to give me some extras from time to time. They threw in a small curious robin this morning to keep me company during my breakfast and the sound of bird wings to top it off, a big, big one flying over swiftly. They know I like birds.

Check out is when the sun is warm enough to make you feel comfortable to pack up your things and if you want, you can stay another half hour afterwards to sit on a rock with your eyes closed, sunbathing, opening them from time to time to take in the view.

Maybe I'll reserve another room for tonight. But first I have to walk, otherwise they won't accept me as a customer. I know the rules. 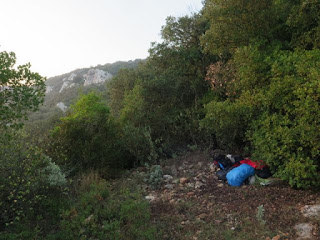 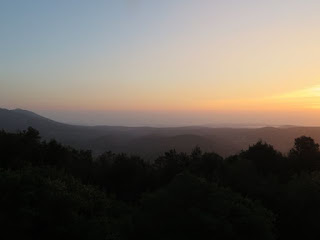