Day 24. These blue days and this sunshine of my childhood .... 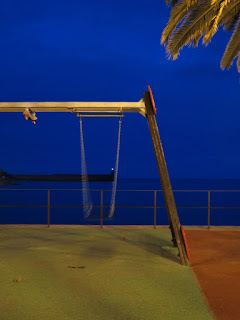 A few days after Antonio Machado´s death, his brother José found a piece of paper in his old overcoat, bearing three notes jotted down with a pencil. The first consisted of the opening words of Hamlet’s soliloquy, “To be or not to be”, words that greatly obsessed the poet. The second was a line in alexandrine metre that read:
"Estos días azules, y este sol de la infancia",
“These blue days and this sunshine of childhood ”.
The last of the three was a variant on a stanza from his “Other songs to Guiomar”:
Y te daré mi canción:
Se canta lo que se pierde
con un papagayo verde
que la diga en tu balcón.
And I will give you my song:
what is lost is sung
with a green parrot
to sing the song on your balcony.
Thanks to this poignant document, we know that very shortly before he died, overcome with grief at the fall of the Republic, Antonio Machado’s thoughts were on the beloved woman who could not be his. And that, sensing that his life was drawing to a close, he felt transported back again to the Seville of his childhood.
at 04:26