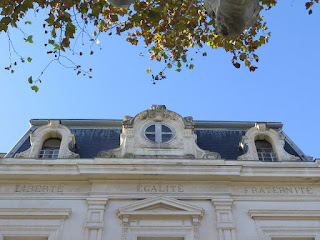 I hadn't planned to wake up in a shed again but I did. Happily and by choice.
The Saturday early morning plan had been to walk from the mountain valley where I had spent the night to Sigean and catch a bus to Narbonne but when I walked into Sigean in the early afternoon and checked the sign at the bus stop where I had seen a bus leaving just when I entered town, I saw it was the last bus for the weekend.

When I don't know what to do I wait. I sit on a bench or in a cafe when there is one around. And there was. An old round room in the middle of Sigean, beautifully decorated with old furniture and black and white photos of people who once visited this cafe, maybe even ran it, on the walls.
I drank coffee and watched the news, there was a big flatscreen on the wall. People covered in blood with terrified faces. It was the morning after the terrorist attacks in Paris. A friend had wrote me about it late at night and it had been on my mind all morning.

The waitress told me there was a train station in Port-la-Nouvelle, a 6 km walk and I decided to walk there and take a train to Montpellier where there was a youth hostel and also a facebook friend who's husband might possibly be able to host me. I contacted her, started walking, by then it was already after three, just in time to catch the five o clock train.

Around four I saw a vineyard in the distance with one of those small houses I often use as a shelter. I could see from the road that the door was open. Right at that moment my friend wrote me that her husband couldn't host me but she would send out a call to see if any of her friends in Montpellier had a bed for me. I decided to stay, the shed looked like a good place and I could save the money for a hostel to pay for a trainticket. I found a pan along the road that might come in handy to cook a proper meal. I tied it to my backpack.

There was no path straight to the vineyard but I found a track through the fields leading there. It was messy and dirty, like most of these places. Chicken bones on the floor, the remains of a bed with dusty underwear hanging from the leftovers of the mattress that was only a metal carcas. The door had a lock though and there was a window without shutters. In the middle of the space there was a big black hole in the floor going into a space filled with water. 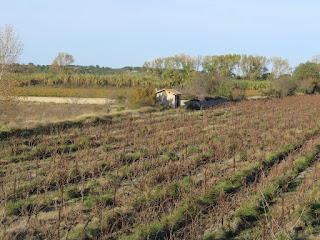 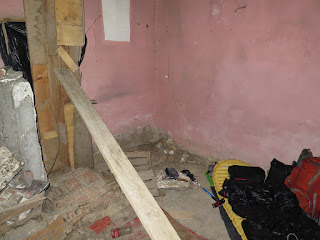 I covered the hole in order not to stumble in it in the dark, locked the door, barred the window and prepared my diner. Made my bed and slept.

I woke up early, opened the door and saw the sun rise. All those people were on my mind who were killed recently, not just in the Paris terrorist attacks but in other places as well. It is crazy how the whole Western world gets shaken when it is being hit in the middle, when our precarious balance is topped over, but how we just blink an eye and continue what we are doing when it is happening somewhere else. Most of the time we don't even hear about it or we just see the headlines pass by. People who wake up in circumstances I wake up in and often far worse but not by choice and not in a warm sleepingbag with food at hand and who don't have the time to wait and watch the sun rise because they are not safe where they are. 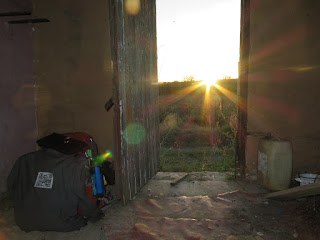 I packed and walked and was happy I was slow and I could take the time to think about the things happening in the world outside my own small world.

In Port-la-Nouvelle I just missed the 8.40 train to Sète. Not Montpellier, plans had changed again, my Facebook friend had a friend in Sete who was happy to host me and it was in the right direction. The next train would leave at 10.40 so I walked into town. Not the touristy corner but the quiet side where there was a square with a cafe that was also the local tabac and betting shop. The locals were gathered, inside and outside. I saw Maroccans and darkly skinned people from deeper into Africa, French men and women, women wearing headscarves. A mixed group was sitting outside next to me, people went and arrived, they shook each others hands, they talked, smoked, drank coffee and wine.

Next to me three women left half of their breakfast untouched and after they left I asked the waiter if I could take it. Toasted bread and orange marmelade and butter. I explained him I tried to live with little, live simple and sustainable. It was a lovely breakfast. 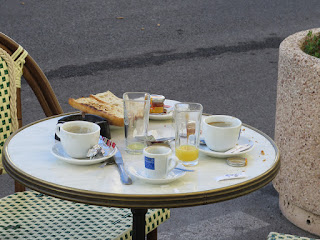 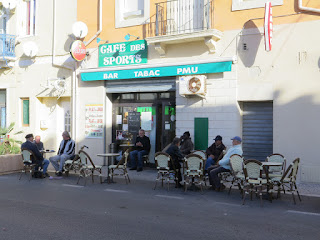 It was the second time in a train on this slow journey, my eyes could hardly keep up with the speed. Narbonne, Beziers, Agde, Sète.
I sat down on a bench in the first square I found leaving the station to finish my writing. There was a big historical building dominantly placed on the side of the square. It had the three words in stone on it that are on everybody's mind these days. Liberté, Egalité, Fraternité. I wish they were more than only words.

I walked through Sete and sat on a terrass. The man at the table next to me wore a t-shirt with the words "young, wild, free". A fancy dressed woman walked in asking if they had crepes. A young couple with a baby, the man carrying a chocolate pie, payed their bill. A man passed yawning, carrying a mega size bottle of coca cola. People with sunglasses and big motorbikes and fashionable hats. And even though I am wearing a worn out, dirty and torn three piece suit and I am smelly and tired of walking for a month, I am drinking a beer and I am part of this.