I found a pair of green trousers in a laundromat. They had been washed and abandoned, the stains hadn’t come out, they covered most of the right leg.
I took them home. I’ve got a soft spot for stains. They are like islands in a sea of ordinariness, messing things up, happy reminders.

More about the clothes in my Pocket Memory shop HERE

I made a mistake today. I was wearing my old shoes, walking the city, waiting for things to fall in place. Everything went wrong. Small things, nothing to worry about. It makes you wonder though.
Just now I remembered the shoes I found last week next to a garbage container. I was on my way to a dance party. I found a pair of shoes, I took them for my Pocket Memory shop, never even checking the size, from the look of them they seemed far too big for me. That same night exactly at midnight an old nomadic dancing friend from Bulgaria showed up on the dance floor. Around 3 she disappeared. I danced on with somebody else, three times he asked me why I was in Barcelona. Three times I answered “because of the blue sky”. He never asked my name. I didn’t ask for his. He disappeared as well. I went home when the birds were waking up. The next day the sky turned black and big hail stones covered the streets.

The sky was cloudy today but I did see the sun getting smaller and bigger again. But it didn’t really. It stayed the same. Other things changed, moved.
Tonight I returned to my safe dark cave in the galery where I live. I have to make some decisions. Where to go. What to do. I just tried on the shoes I found. They are a perfect fit. So here I am, in my full moon dress on a dark moon night, connecting dots.
New shoes. Let’s see what happens now. 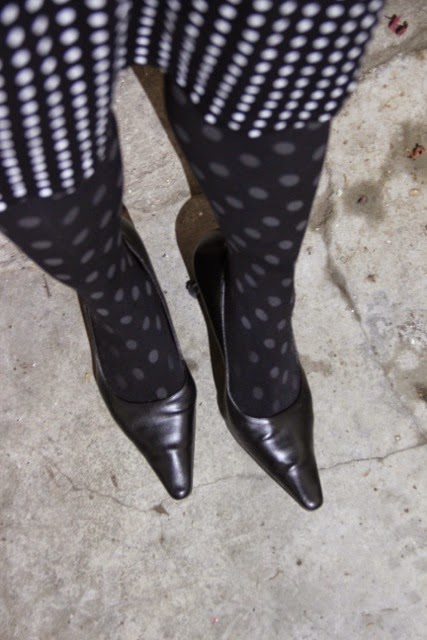 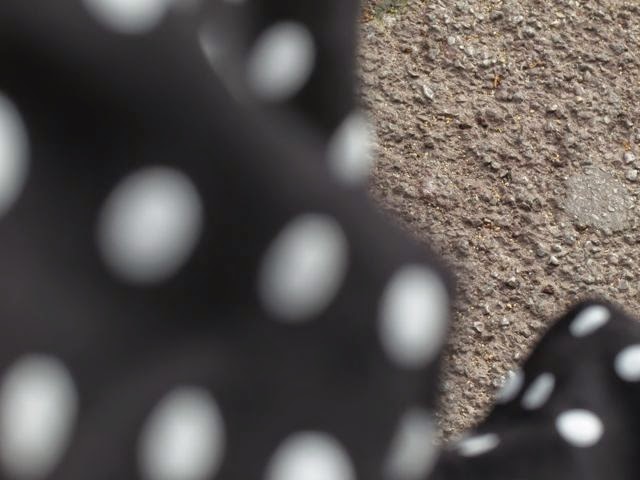 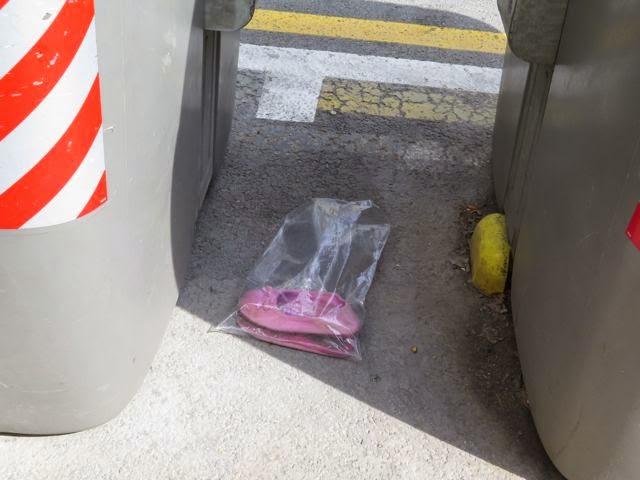 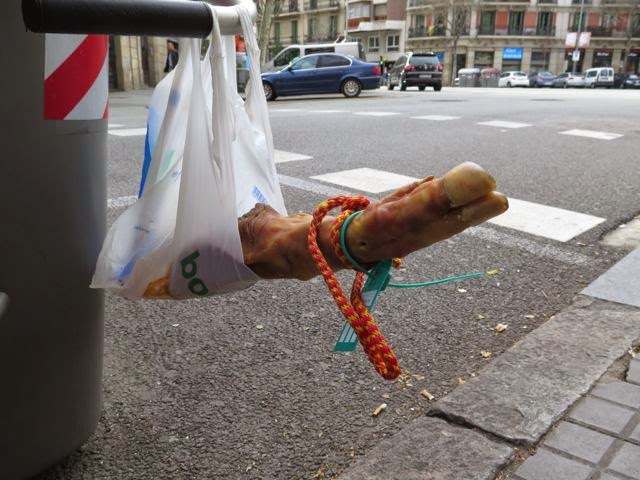 Toni likes sports. She likes dark colours, green and red. Sometimes she dresses up and goes out but not too often. She rather walks in an old sweater and shorts along the shore. The handbag is really too big for her but it belonged to an old friend who moved to the other side of the world. She carries it with her always. The boots were expensive but she couldn’t resist buying them.

(everything found on Sunday 15, 6 different locations in Barcelona)
at 07:34 No comments:

My Memory Shop will open soon! There is a new blog already: MEMORYSHOPPING 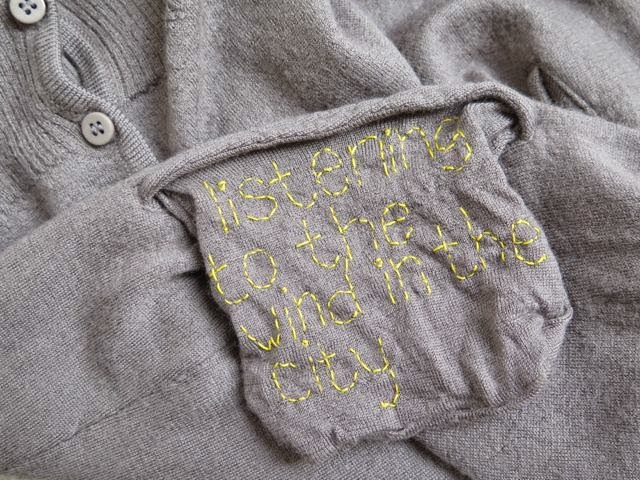 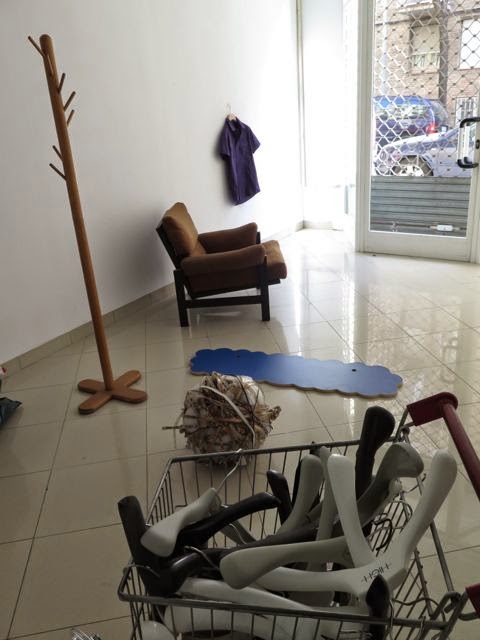 I was a bit hesitant to wear my suit today since I was visiting the Arrels Foundation, one of the main organisations in Barcelona trying to improve the situation for the homeless in this city. I didn’t want to come across as an official person or somebody with the means to dress well but I also realised that the people there deal with being judged by how they look in a far more disturbing way than I do so I wore my suit, casually, which is getting easier these days because the weather allows me to roll up my sleeves and trousers and the suit is getting shaped after how I wear it more and more. I was invited by the Communication Department of Arrels after I had informed them about my Memoryshopping project, making sure that they knew my main goal was to give what I had to give and not to ask for extra publicity by getting in touch with them.

It was a wonderful visit. Juan showed me around and explained about all the services they offered and how it worked. There were shower rooms, computers with internet possibilities, storage rooms for people who needed a temporary place for their things, rooms with clothes, sanitary items, space for special activities and he explained me about the housing they supply, food, medical assistence and how they walk around in Barcelona to check in with the people out there.

Apparently there are around 30 organisations in Barcelona that deal with the homeless in different ways but the Arrels Foundation is the only one trying to make connections with and learn from similar organisations in other countries, putting a lot of energy in communication to create awareness and change. We talked about numbers, about the different profiles, about how being in the same situation didn’t make a difference in dealing with each other, how there was racism and violence within the homeless community as well. We talked about the importance of creating awareness, about the dangers of being out on the street and how it kept being complicated to convince officials of the importance of seemingly small services like showers, safe storage, communication means and activities to make them feel usefull, instead of just focusing on beds and meals. We talked about how difficult it is to decide if you should give money or not to somebody begging and that it is nonsense not to give an alcoholic homeless person money that will probably be used on alcohol, because it might be the thing he most needs. Juan even called it “medicin”. (And it makes me think of an interesting article I read the other day about addiction, very worthwile to have a look HERE )

We passed a man in the corner of one of the communal rooms who was dressed very nicely. Juan told me he was one of their cliënts and that he was wearing a suit every day. We smiled at each other, maybe because we both wore suits, maybe just because we were two human beings meeting each other in the same place. I had already read about the “Homeless Fonts” project, a design project inspired by the cardboard signs the homeless often use and in which homeless people create new fonts based on their own writing. The fonts are being sold to companies around the world and recently even Monotype, the leading international typeface company, added to the project HomelessFonts.

Juan told me about the painter and illustrator Miguel Fuster, who had lived on the streets of Barcelona for 15 years and published three graphic novels about it afterwards. He gave me the first one, titled “15 años en la calle” as a gift. I was honoured.

I talked shortly with Marta, who explained me about the Barcelona situation compared to other cities in Europe and told me how well things were arranged in Amsterdam. Sometimes I complain about the country I’m from but I have to admit there are a lot of good things happening there too.

On my way out I admired the furniture that was part of an ongoing project in which a group of homeless people create stools, lamps and tables from pieces of metal and wood picked up from the street. Maybe I can some use to decorate my shop with and see if I can sell it.

I was impressed and a bit shaken when I walked out. It was a beautiful sunny day but the world suddenly looked very vulnerable. 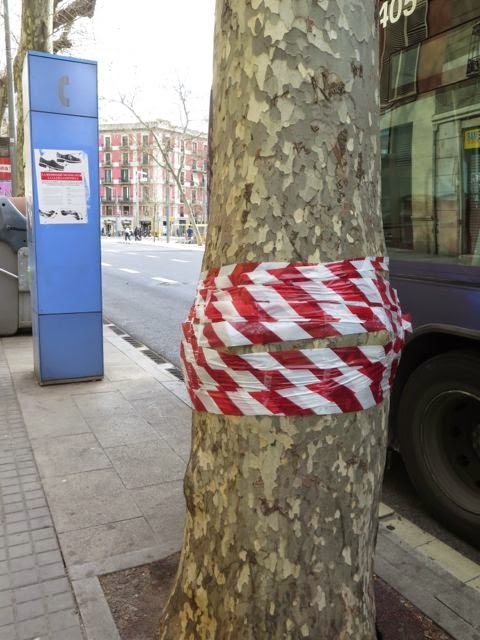 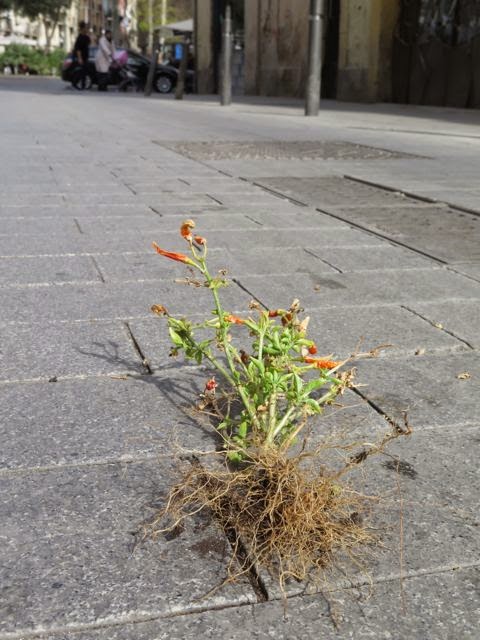 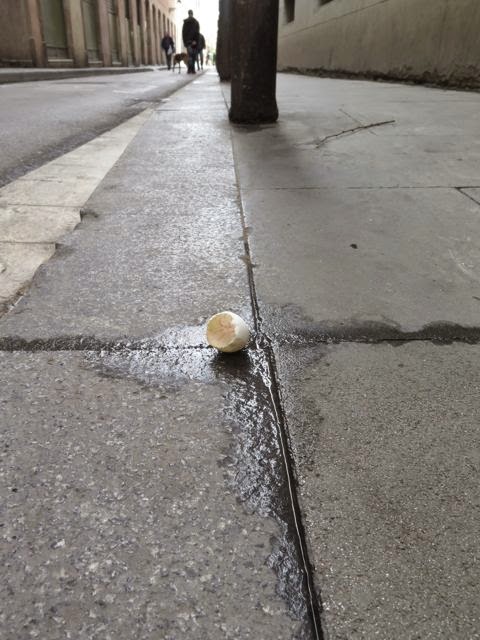