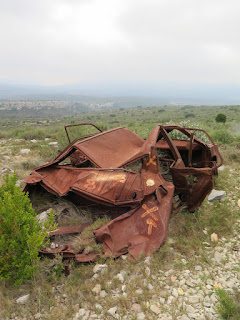 The fog is slowly lifting. La belle Auriole is waking up, young people arrive to help with the farmwork. An old ecological farm, all alone in the mountains, 6 kilometers from the nearest tiny town, Opoul, where the people are kind and I spent two evenings in the only bar in good company and feeling at home. A long circular walk yesterday along the massive chateau and the abandoned village of Perrillos, first time I walked without the weight on my back and accompanied by a friend. It was a beautiful day.

The cat insisted on sitting on my lap and the dog is starting to become less afraid but keeps his distance. The big brown chicken, the only one I´ve seen walking around freely, enters the kitchen, curious. The other cat, the dusty one with the scruffy ears, the fighter, sleeps in the window. There is a small hole in the terrain in front of the gite which is every animal's favorite spot, they take turns, the cat rolls down in it to get even dustier, the dog lays down in it with his head on his feet, staring into the distance, staying alert. Sometimes he digs in it to make it a bit deeper, to reach some cooler earth, at ten it is warm already.

It is a pleasant community. So different from the villages I walked through on my last two days where there were bored tourists, frustrated locals, noisy people. Where there was nothing charming about the abandoned, graffiti covered buildings, people were suspicious, where two girls were following me in the dark and where twice I almost got caught in my illegal sleeping place.

I passed through Salses on Monday, where the only attraction in town was a huge fortress that was renovated beautifully but expensive to enter and where all the locals I asked about some nice inexpensive accomodation in the area after another week of mainly sleeping under the stars, tried to hook me up with their cousins and neighbours who all rented out run down mobile homes and dodgy rooms for special prices that didn´t sound too special to me. I did some internet research and found La belle Auriole. I crossed the big highway to get away from the flat land with the bad vibes and straight away it was a different world. It was a 10 kilometer walk from Opoul and another 6,5 to the farm but a friend was coming from Barcelona, driving in 3 hours what I had walked in 26 days to take me in his car for the last stretch.

The road was long and winding, over my head a massive flock of starlings performed their flying skills for the first kilometers, spreading out from time to time and then returning, forming shapes, circles, dogfaces, ribbons, creating whirlwinds, darkening the sky when they were just above me.

I arrived in Opoul after dark, there was a bakery and a small foodshop and a bar, there is always a bar. I had walked 25 kilometers. The draft beer, a Dutch one, was the best beer I had tasted in a long time. But any beer would have been.

The locals were there and within 10 minutes one of them had joined me at my table and offered me a beer. Jean-Louis was an architect who had travelled around the world, worked for an NGO in Africa building schools, had seen kangaroos in Australia, the Himalaya, all Asian countries and now he was living here, in a cave, but a comfortable one, with a tv and a kitchen and a bathroom. He was counting bats at night and getting payed for it. He explained that the number of bats can tell you a lot about air pollution. When I told him I was walking to Paris he told me he was going there as well, for the COP21. I hadn´t mentioned it yet and the next day, when in the same bar one of the other locals told me that everything Jean-Louis tells people only happened in his imagination, I still wondered where that had come from. And if this other local, who looked like he had been in the bar the biggest part of the day, was speaking the truth.

But that was the next day, it was still Monday and Jean-Louis was just inviting me for an aperitive and diner in his cave when the door opened like I knew it would and after having slowly moved into another world in 27 days I was suddenly transported back to my old world and I got stuck in the inbetween, like in a dream but the dreams I dreamt later on that night seemed to be more real than this small moment, this opening of the door and seeing a familiar face.
I didn´t pinch my friend like I had told him I would but ordered him a beer and offered Jean-Louis a glass of red wine and he took the opportunity to tell in detail about his journey around the world again in a mixture of French and English. He said he spoke many languages and I am not sure if I believed him but that didn´t matter, as long as he believed it himself.

We left, drove up the long dark road into the middle of nowhere and made a fire in an old farmhouse, ate pasta and drank wine and talked, caught up, and by the time the fire had died he had become part of my world again, my different worlds had become one again.

We walked the biggest part of the Tuesday. It was the first time I walked without the weight on my back, it was the first time I returned to the place I had started from in the beginning of the day. One of the rare occasions where I could look at the colour of the mountains changing into a pale blue at the end of a walking day without wondering where to sleep.

The castle, the skeleton of a rusty car, the bare rocks, the ghost town where there was still so much room left on the graveyard. The site of a planecrash, the beautiful views. I realised again how being silent in company is so different from being silent on your own. It is a very enjoyable thing and we balanced our talking and our silence well. I only moved back into my solitary state one moment at the end of the afternoon when we had almost reached the castle again and my friend was out of sight and the mountain views on all sides were asking for attention and I stood still, the first houses had turned on their lights in the valley east of Opoul, the silhouettes of the mountains were dark already and everything seemed to stand still until suddenly in front of the blue mountains a lonely plane crossed the sky from left to right. And there wasn´t just the pleasure of being in that moment but also the pleasure of sharing the next moment with somebody talking about what happened just before, sitting on a rock while the sun disappeared behind the now dark blue mountains, smoking a cigarette.

We were welcomed in the bar like old friends, we met the mayor´s brother, admired the 4 wheeled monster one of the young kids was driving, people told us how nice the place we were staying was, people seemed to like each other, they liked us being there, they embraced the strangers we were to them.