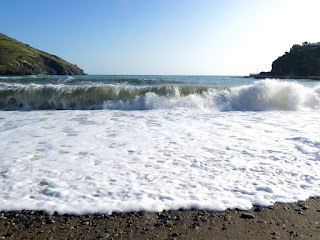 The sea was loud on the day of the dead. The beach where I had sat early morning yesterday was inaccesible now. The waves reached  almost until the small wall. I sat on top of the wall and looked out, to where the water was framed by rocks on both sides.

I had thought it would be a good idea to stay here in Portbou for another night to spend the day with the ghost of Walter Benjamin. I had even tried to find the hotel where he spend his last night to see if I could book a room there but the hotel Francia doesn´t exist anymore and it is hard to find the place where it once was situated. I went to the information office to ask questions but it was closed until the middle of November and every time I tried the door of the Benjamin Foundation, it was locked as well. The big beautiful building which they had announced triumphantly many years ago to become the new home to the archive and be a new memorial space for research and contemplation hadn´t moved away from its rundown state apart from one big space with a glass door that was empty.

It is unknown where Walter Benjamin´s body is. He isn´t under the stone in the graveyard which reads:


I walked up to the monument again, the long metal stairs going down into the earth, the portal into the sea and back up into the sky and read again what I had already read before I came here on my iPad, browsing through my Benjamin library:


I realised his spirit wasn´t here but in his writings. And that it would make more sense to spend the day here with all the ghosts of the people who died in a strange country like Benjamin did after they passed through Portbou to flee their home, in both directions, to France during the Spanish Civil War and to Spain during the second World War. With all the people who died in a violent sea recently. With my own dead.

And that is what I did.

I had brought some stones here from the Barcelona beach to put on Benjamin´s grave but I walked back to the sea again and threw them in the waves where they joined all the other stones that continuously were being washed upon the shore and drawn back into the water again, while making a sound you can only hear when you stand close the water. Stone on stone on stone on stone. Changing each other´s shape like human beings change each other´s shape by getting close to each other. But so much slower.