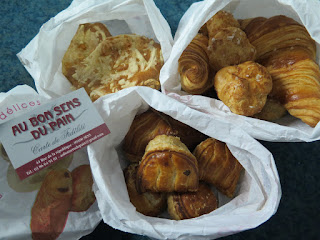 I walked into his small shop because the sign outside said 4 croissants or 4 pains au chocolat for €2,-.
Sometimes I spoil myself and when I do I always wonder. Shouldn´t I be more strict about living as simple as possible? Isn´t there a better way to spend my money? But in order to be able to deal with the freezing but free nights in my sleepingbag in the woods after a full day of carrying a heavy backpack around, talking to people on the road, answering e-mails kind people send me and write about my walk, I spend my money on small but not too expensive things that make me smile from time to time. I asked him if I could have 2 croissants and 2 pains au chocolat for the €2,- and he asked me what on earth I was doing in Sens. I told him about my walk, he packed the sweet things in a bag and when I wanted to give him money he said it was a gift and asked if I had tried the local speciality, the gougère, made out of pastry dough and cheese. He warmed one up for me and asked if I already had a place to sleep for the night, otherwise I could sleep there but I already payed for my hotel and it was too late to check out. Then he asked what I would eat that night and when I said I hadn´t thought about that yet he said "Come back after 7, I will throw out the things I can´t sell tomorrow and I can give you some things."

He had said 7, dix-neuf but my memory turned it into 6, and when I came back shortly after 6 the bakery was still open but the baker was tired and thought about closing early anyway. He offered me coffee and I asked him about his work and his life. He loved baking bread but it was a tough life. He was doing it all on his own, baking everything himself, selling the bread in his shop, every single day of the week. He hadn´t planned to come to Sens, there was an opportunity to buy this bakery here and he had just done it but he was thinking about selling and maybe move somewhere else, out of France, maybe do something else. Let´s see.

It is a beautiful profession, baking bread. It is one of the two things I sometimes think about I would like to do if I wouldn´t be an artist and a writer. Be a baker or a farmer. Both underestimated professions, like being an artist is. Long days, a lot of work, little payment. But very fulfilling if you do it in the right way. I sometimes try to combine it. I was a baker in the Nomadic Village twice, baking bread for the artists every morning. I baked bread last week for the people I visited, living in a small community doing permaculture in the mountains in France. When I feel at home somewhere, I bake bread. Water, flour and salt is al you need. A little bit of yeast. It is a miracle how that works. Just as miraculous as sowing seeds or planting something and see what grows out of it. I tried that as well and I miss it when I am on the road.

The baker filled three paper bags with all sorts of delicious things and I thanked him. It is hard to express how deeply I am touched when somebody I don´t know at all, somebody I just randomly meet, is so generous and warm and open.

I often wish my French was better. There were so many other things I could have asked him if my search for words and winding sentences around the expressions I can´t find wouldn´t take up so much time. I manage quite ok though and who knows, maybe some other day, somewhere else, in the place where he will be doing something else, or maybe still will be baking bread.

I forgot to tell him the croissants were the best ones I ate in a long long time, and I love eating croissants. I have my favorite places for coffee and croissants in Amsterdam, Weimar, Barcelona, Paris. His croissants are better. It must be a combination of skillful baking and lots of love.

If you are ever in Sens and if he is still there, go to "Au bon Sens du Pain", 44 Rue de la Republique. Tell Bruno I sent you there. Buy something you like, eat it, enjoy it and send me the bill afterwards. 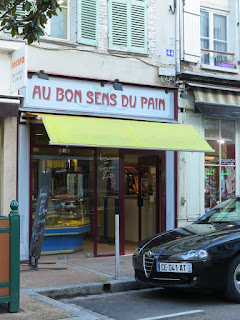