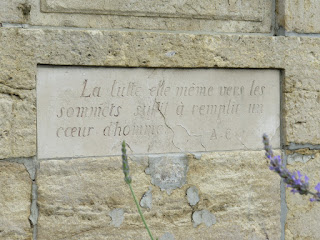 I bumped into Camus when I walked out of the cafe in Villeblevin. I wondered what he was doing there. It was a tiny village where nothing happened and I couldn´t image people would even read Camus there. There should be a good reason why he was there.

There wasn´t enough time to think about a translation for the sentence on the monument since I had decided to catch a train in the next village and I was late already. I wouldn´t be able to cover the more than 38 kilometers to my couchsurfing host today and my tired body needed a proper bed for the night.

I took some quick photos, rushed along the road with my heavy backpack, fast cars passing me. A man driving into the other direction stopped to ask me if he could take me somewhere. I thanked him and told him I was travelling on foot.

I was in time to buy a trainticket and catch the train but I forgot to stamp the ticket. Nobody was checking tickets in the train though and when I got out at Saint Mammès to walk along the Seine for the last stretch, the ticket was still unused in my pocket, valid for another week. I wondered if I could give it to anybody but I didn´t find anybody who wanted it.

I walked, the Seine was comforting, big boats, old houses. I crossed the bridge to Champagne-sur-Seine, walked along the water again, entered the industrial town, metal industry, old factory buildings, and sat down in the cafe where the workers were gathered. I had almost forgotten about Albert Camus already.

My couchserving host wouldn´t be home until seven so I did some writing and then Camus came back to my mind and I googled him. This is what I read:

"Camus died on January 4, 1960 at the age of 46, in a car accident near Sens, in Le Grand Fossard in the small town of Villeblevin. In his coat pocket was an unused train ticket. He had planned to travel by train with his wife and children, but at the last minute he accepted his publisher's proposal to travel with him."

The text on the monument is a quote from his hand. I read it carefully now and checked if my translation was right. It was.

"The struggle itself towards the heights is enough to fill a human heart." 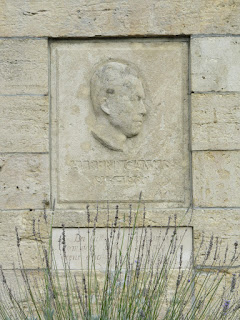 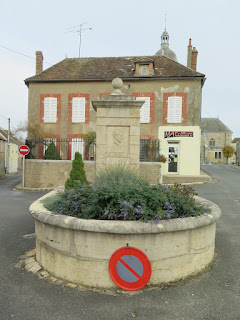